GreyArchon
July 31 in ORK Support
I'm making a game where the player has one overworld unit that moves around and can enter grid based battles in another scene that use the whole party, excluding the overworld unit. My game start event has the overworld unit join the active group, then leave the battle group, and hide member after that. In the grid battle, the first unit always has components for Character Controller and Player: Button Controller (disabled). This first unit will also get misaligned from the grid sometimes after moving. 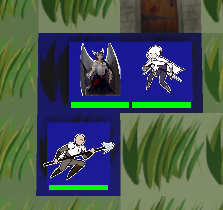 It doesn't happen after every single move, but it only happens to the unit that gets those components.
Sign In or Register to comment.